In Te Domine Speravi… In Thee, O Lord, I Have Placed My Hope

The roots of the Anglo-Saxon name Apsey come from when the family resided near one or more notable aspen trees. The surname Apsey is derived from the Old English word aepse, which means aspen. The surname may also be a nickname in jest, for a timid person, referring to the trembling leaves of the tree.

The English language only became standarized in the last few centuries; therefore, spelling variations are common among early Anglo-Saxon names. As the form of the English language changed, even the spelling of literate people’s names evolved. Apsey has been recorded under many different variations, including Apps, Apse, Abbs, Abb, App, Apsy, Epps, Ebbs, Epesy, Epp and many more.

First found in the county of Middlesex in southern England where they held a family seat from very ancient times. During the Norman Conquest of England in 1066, unlike many Saxon families, bearers of this name managed to hold onto much of their holding and these are recorded in the Domesday Book, a census taken in 1086 by King William of all land holders. 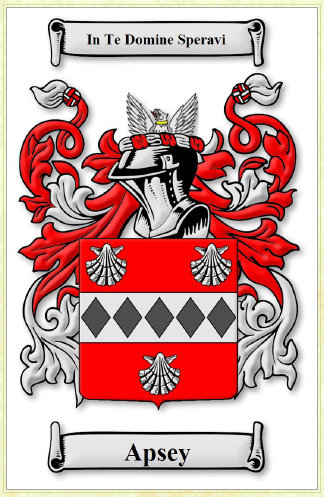