I, Samuel Apsey, of the parish of Chardstock, in the county of Dorset, labourer, being very sick and weak of body but of perfect mind and memory, thanks be given unto God: therefore calling unto mind the mortality of my body, knowing that it is appointed unto all men once to die, do make and ordain this my last will and testament; that is to say, principally and first of all, I give and recommend my soul into the hands of almighty God that gave it, and my body I recommend to the earth, to be buried in decent Christian burial, at the discretion of my executor; nothing doubting but at the general resurrection I shall receive the same again by the almighty power of God. And as touching such wordly things wherewith it hath pleased God to bless me in this life, I give, demise, and dispose of the same in the following manner and form.

First, I give and bequeath to my eldest brother Malachi Apsey my box and clothes, and pinchbeck watch.

Also, I give and bequeath to my eldest sister Sarah Amor the sum of five pounds, of lawful money of Enlgand, and my chaff bed.

Also, I give and bequeath to my brother Michael Apsey the sum of thirty pounds, of lawful money of England, and my clock after my Mother’s decease.

Also, I give and bequeath to my sister Phoebe Harris the sum of five pounds, lawful money of England, and my feather bed.

Also, I give and bequeath to my dear brother Jeremiah Apsey, whom I likewise constitute, make, and ordain my sole executor of this my last will and testament, the sum of thirty pounds, of lawful money of England, and my round Brazil table.

And, I give and bequeath to my brothers Michael and Jeremiah Apsey, both aforesaid, my garden plot, (which was given to me by my Mother), to be equally shared between them, and build thereon if they think proper but they shall have no claim thereto till after my Mother’s decease.

Also, I give and bequeath to my aforesaid sister Phoebe Harris’ son Samuel Harris my siver watch.

All the aforesaid sums of money shall be respectively paid by my exector Jeremiah Apsey, aforesaid, out of the sixty pounds which are now deposited in my box; five pounds in the hands of my first cousin James Chard, (four pounds of which I lent him, and the other pound is for a side of bacon) and eleven pounds, thirteen shillings, and nine pence, are due to me from Mr. Thomas Deane of Cotleigh farm, in the parish of Chardstock, aforesaid, for husbandry labour, at the end of six months after my death.

Any other things or values left, after the necessary expences of my burial &c shall have been paid, shall be given by my executor aforesaid to my dear Mother in small sums according as she may be in need.

Also, the expences of the burial of my dear Mother shall be defrayed by my executor, aforesaid, out of what still remains over and above the expences of my burial. and what have been received by my Mother in her lifetime.

And I do hereby ratify and confirm this, and no other, to be my last will and testament.

In witness whereof I have hereunto set my hand this day and year above written.

The mark (X) of Samuel Apsey

Signed, sealed, published, pronounced, and declared by the said Samuel Apsey, as his last will and testament in the presence of us the subscribers 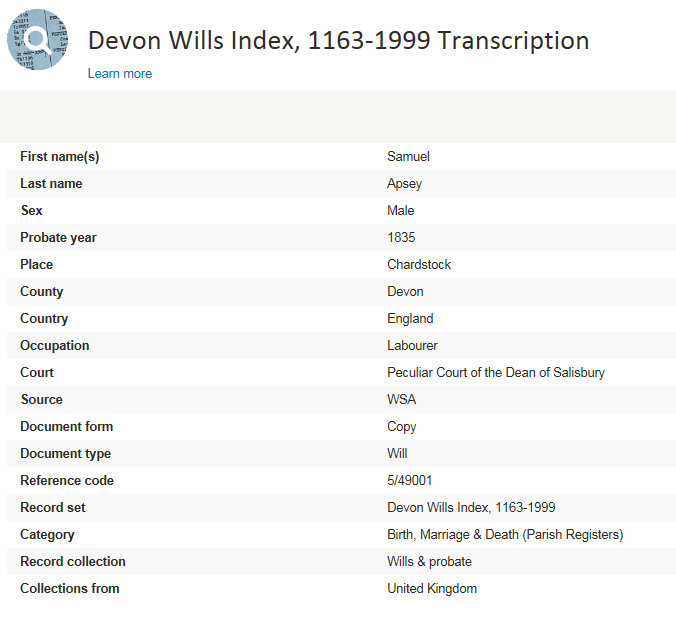 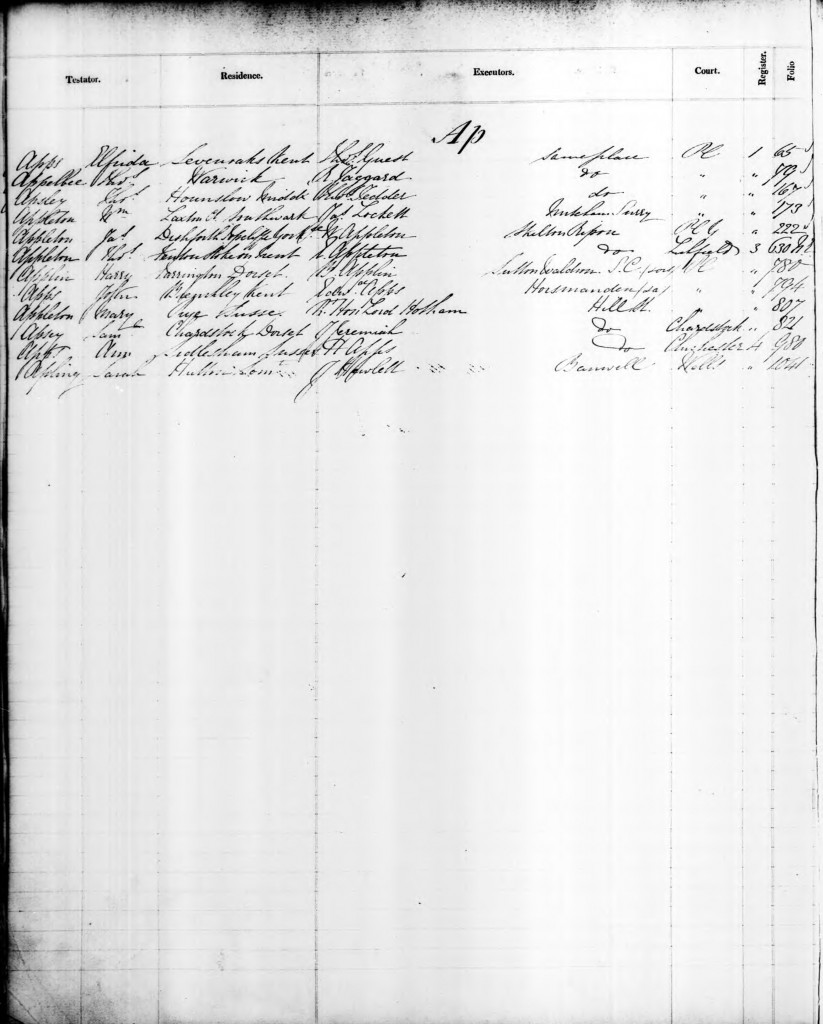