Probate of Samuel Apsey executed 9. 5. 1799
John Hewish Clerk Bachelor in Divinity Prebendary of the prebend of Chardstock antiontly founded in the Cathedral Church of Sarum to our well beloved Reverend Robert Stephens, Charles Buckland and Charles Tucker Clerks Greeting
We do hereby authorize empower and give commission unto you (in whom we perfectly confide) jointly and severally to administer the oath under written in manner and form there set forth unto Judith the wife of Richard Chard late Judith Apsey the lawful daughter of Samuel Apsey late of Chardstock in the county of Dorset and our prebendal jurisdiction deceased and sole executrix named in the last will and testament of the said deceased requiring you to duly return the presents to us or our lawful surrogate or other competent judge in the behalf with the said original will annexed and a certificate under the hand of either of you who shall duly execute this our commission testifying what you or either of you shall have done in the premises by virtue of those presents on or before the last day of June next ensuring otherwise the same to be void and none effect. Dated at Sarum under the seal of our office the sixth day of May in the year of our Lord One Thousand Seven Hundred and Ninety Nine.
Signed…
The form of the oath to be administered to Judith the Wife of Richard Chard laying her right hand on the Holy Gospels is as follows:
You swear that the paper writing hereto annexed doth in it contain the true original last will and testament of Samuel Apsey late of Chardstock your late father deceased, as far as you know or believe that you are sole executrix therin named, that you will duly execute and perform the same, and pay his debts and legacies as far as his goods chattels and credits will thereto extend and the law bind you and that you will make or cause to be made a true and perfect inventory of all and singular the goods chattels and credits of the said deceased which have and shall come to our hands possession or knowledge and exhibit the same
into the registry of the prebendary of Chardstock and pass a just and true account of your executrixship when thereto lawfully required. And that the goods chattels and credits of the said deceased do not amount in value to the sum of Three Hundred pounds So Help You God Kiss the book.
This commission was duly executed at Axminster in the county of Devon on the 9th day of May 1799. And the oath above written was administered to the said Judith the wife of Richard Chard and by her duly taken before me.
Signed… CW. Buckland
Note: The Parish Registers record that Samuel Apsey was buried at Chardstock, St Andrew’s 22. 3. 1799 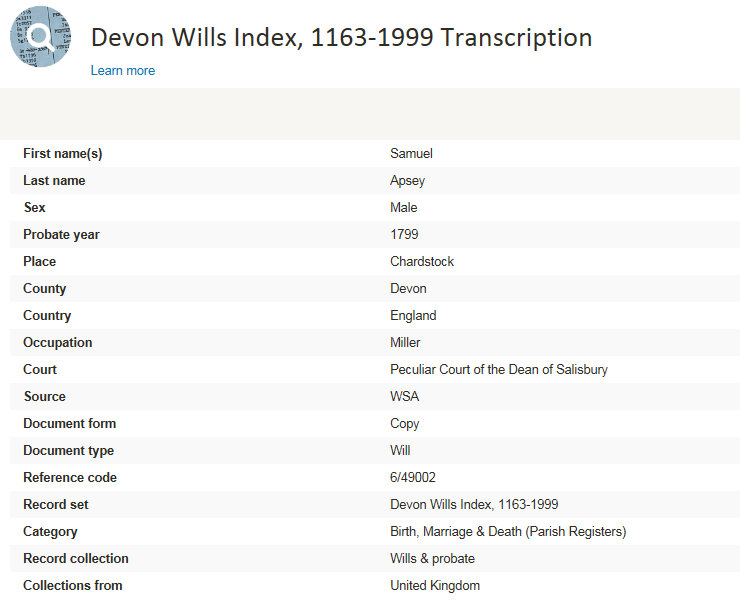