was the daughter of Charles Morgan and Esther Jenks Apsey.

Geraldine is listed in the Michigan 1920 census taken January 6, 1920.  Her age at last birthday is given as 1 10/12.  I am having difficulty identifying what year exactly her birth is.  Marguerite’s  (her sister) age at last birthday is given as 1 0/12 and we know from her Social Security death record, her date of birth is February 15, 1918.  It is possible that Geraldine was born 10 months prior making her date of birth March of 1917.  That would make her birth prior to her parents’ marriage.  Also, Marguerite’s date of birth in  Boyne City, Michigan is only 3 days prior to her parents’ marriage in Grand Rapids, Michigan.  That is a long trip for someone who just gave birth.

Is it possible that Charles and an already pregnant Esther were married February 18, 1918 in Grand Rapids, had Geraldine in March of 1918 after moving to Boyne City, Marguerite 10 months later on February 15, 1919, and Robert John 9+ months later on November 28, 1919?  It will be interesting to find actual birth records for the children.

The only reference to Geraldine after the 1920 census is this Find a Grave.  Her date of death/burial was October 26, 1920. 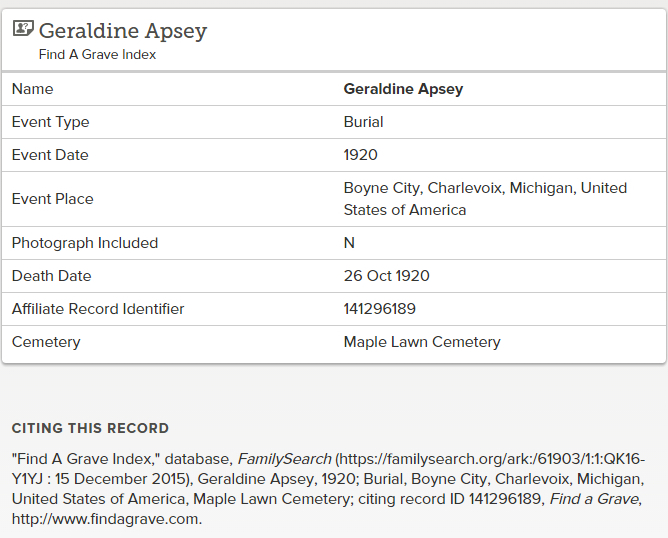