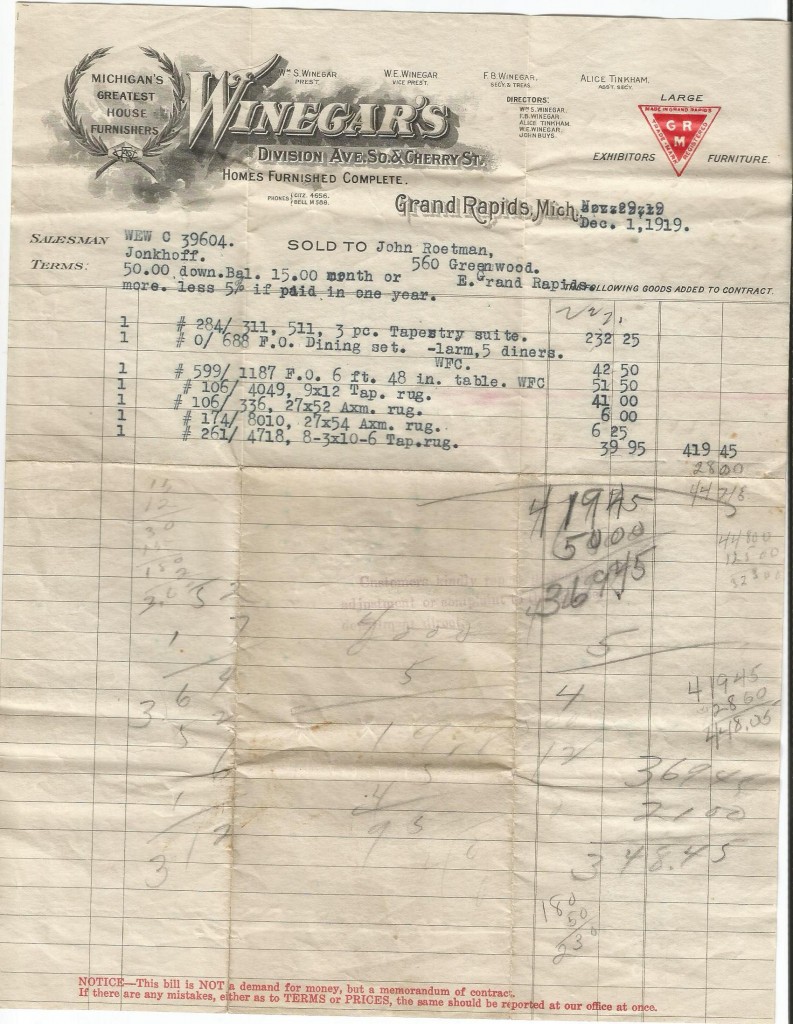 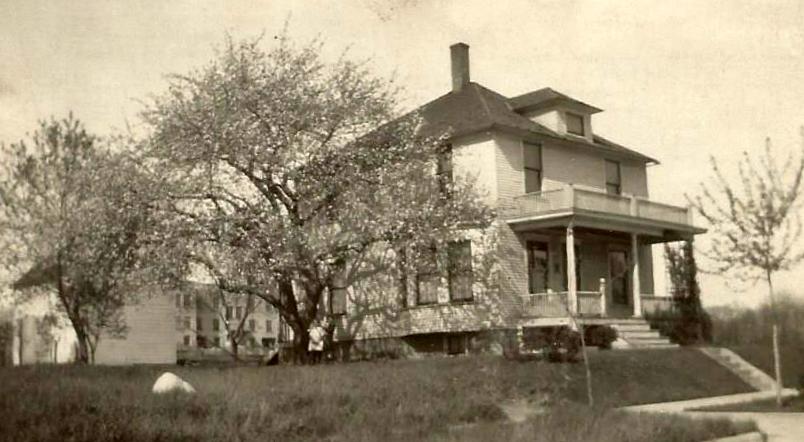 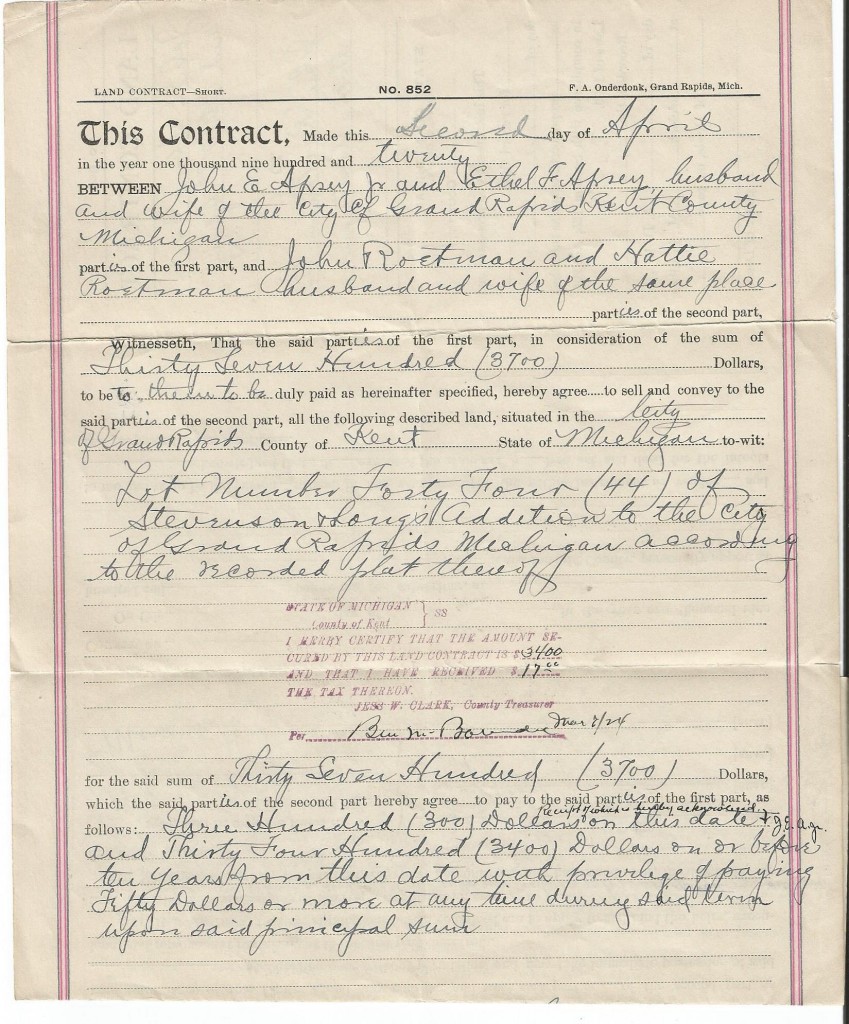 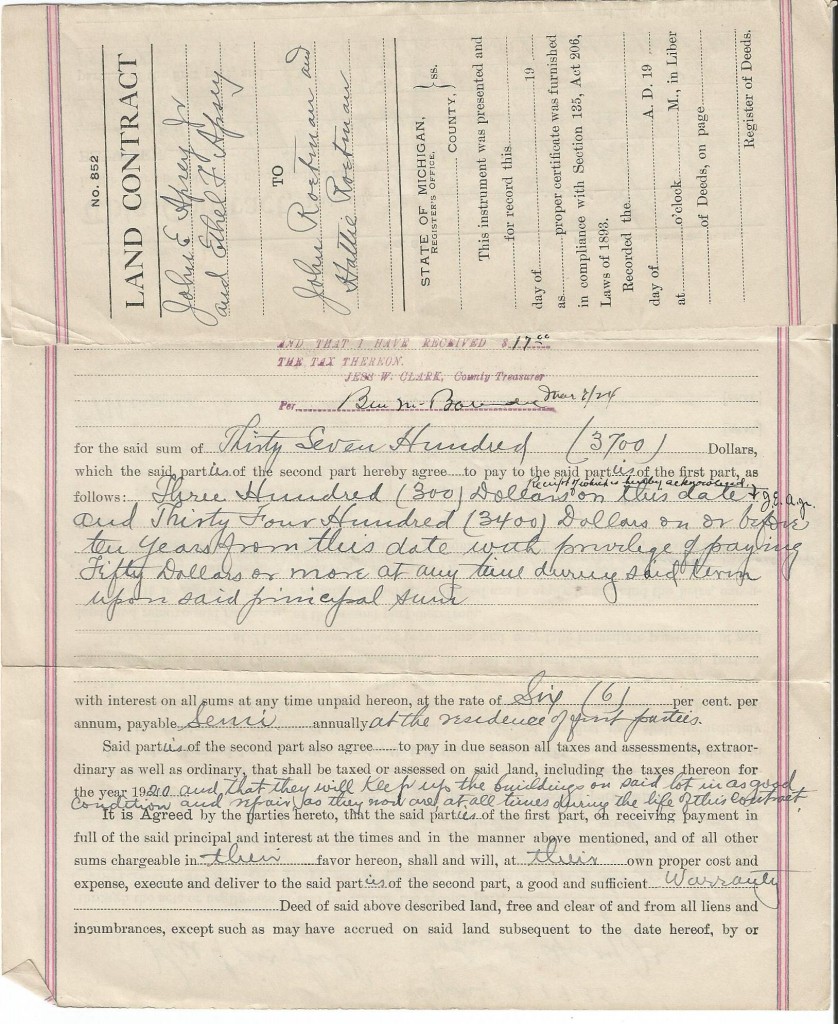 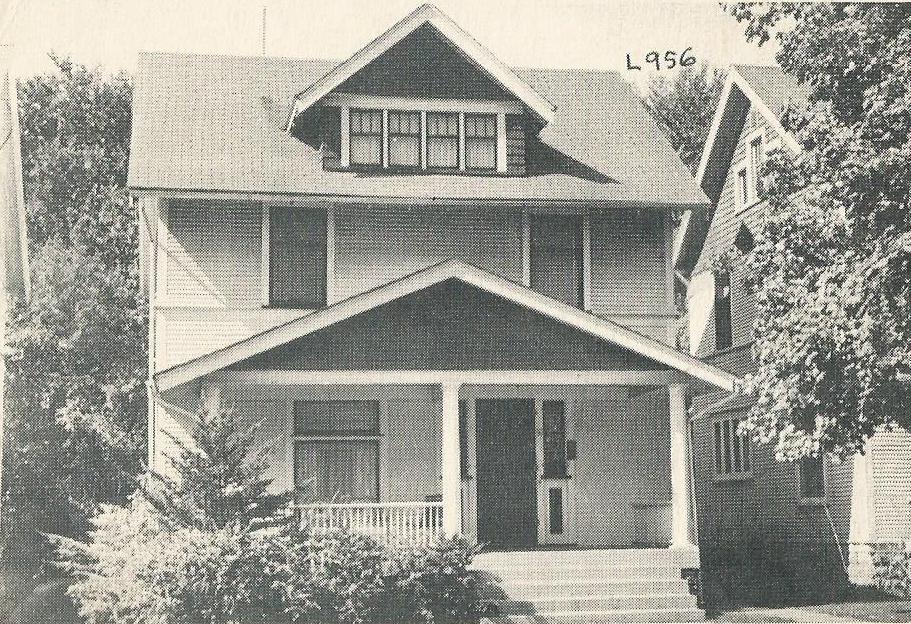 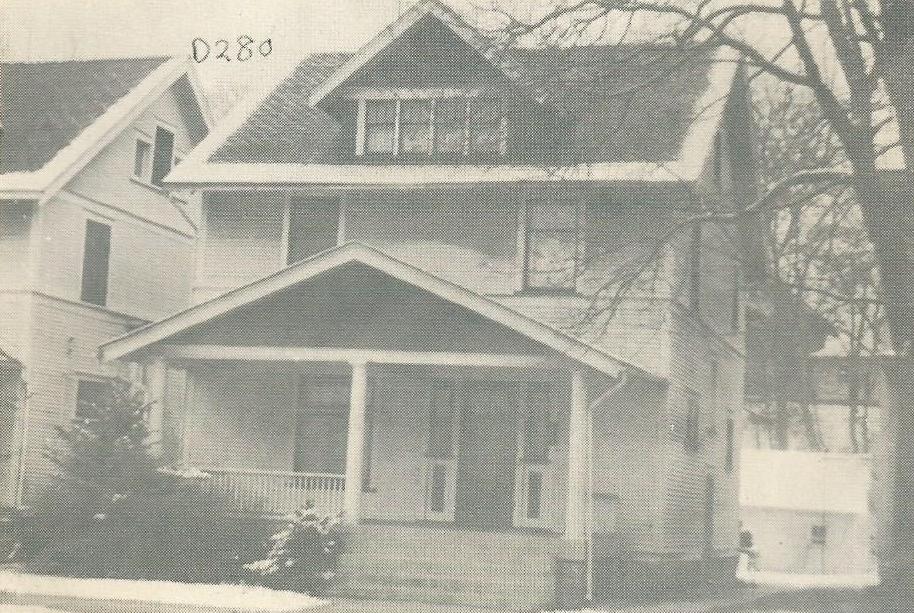 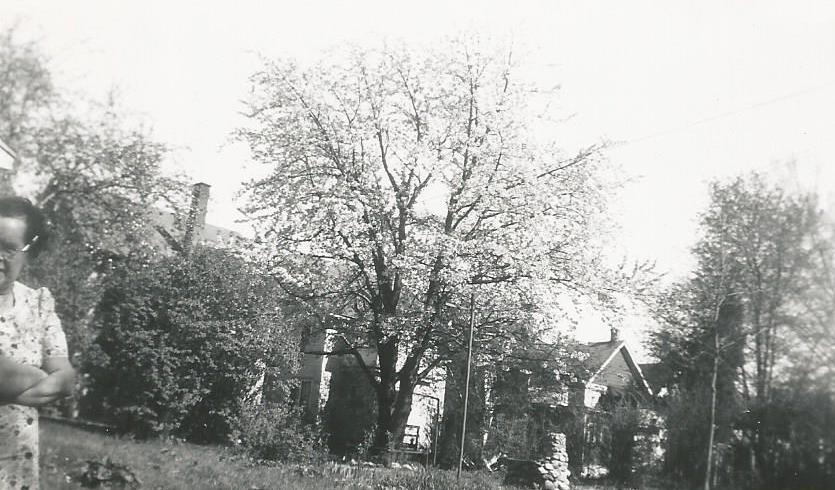 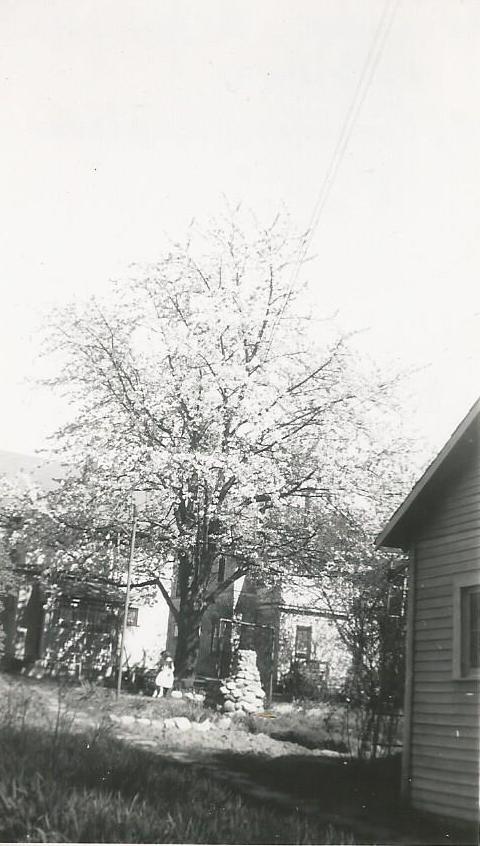 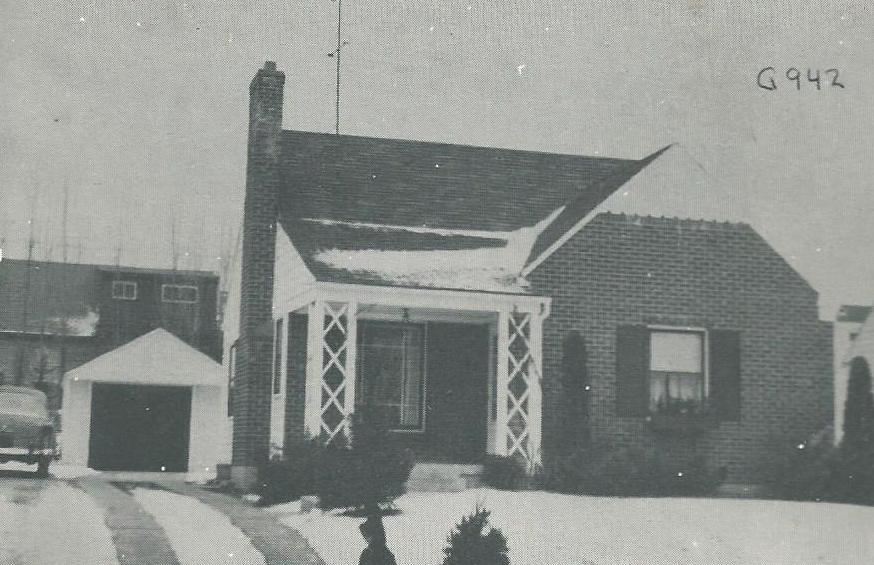 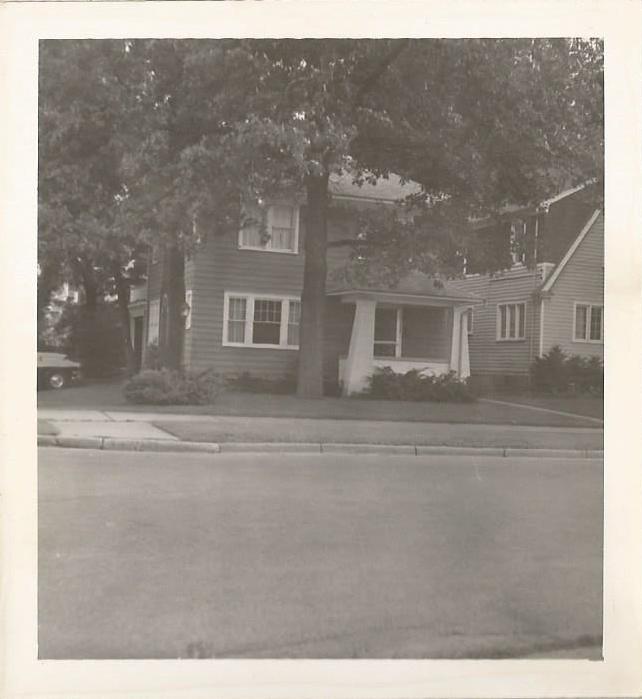 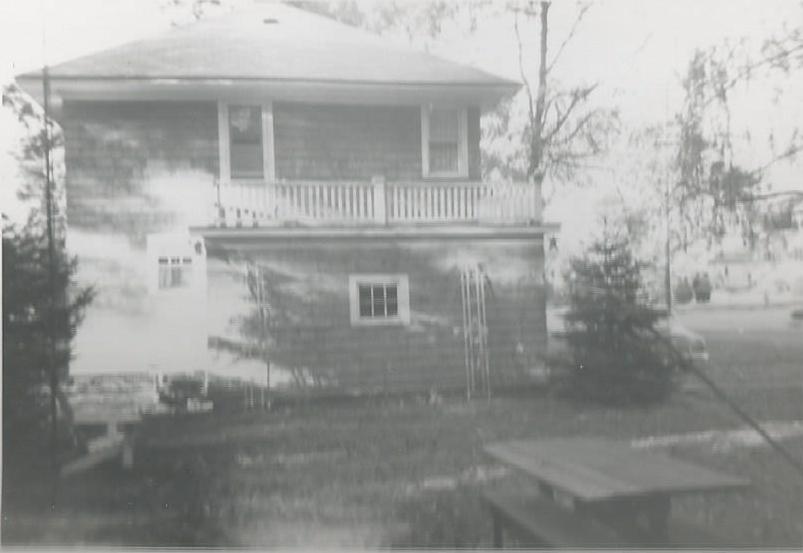 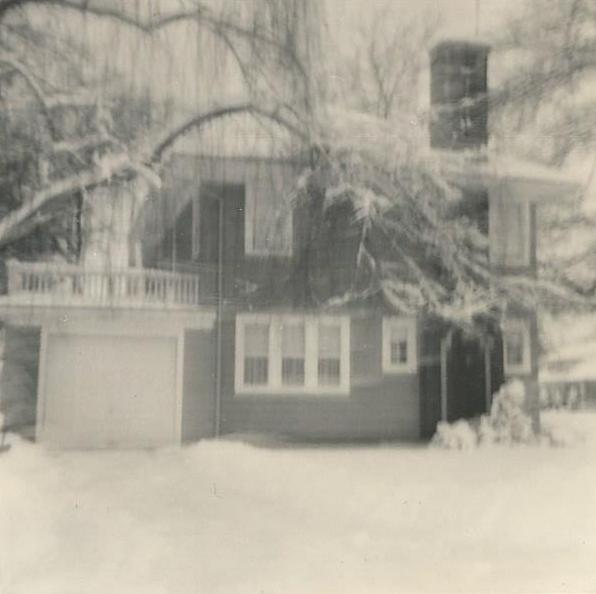 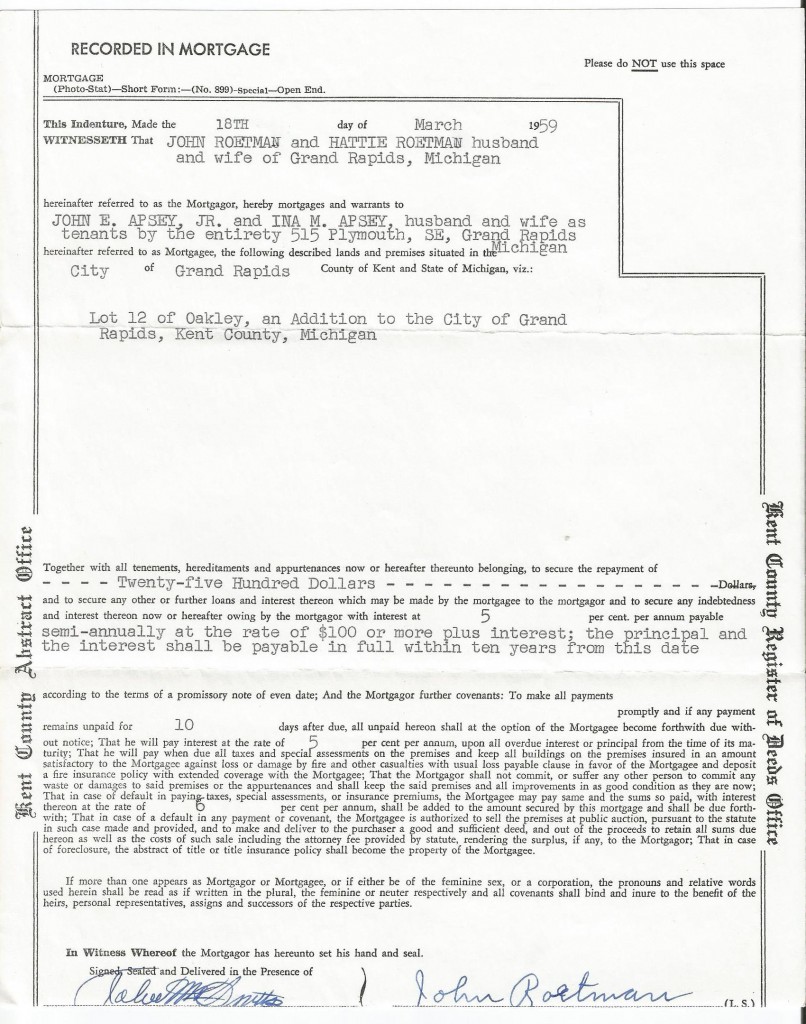 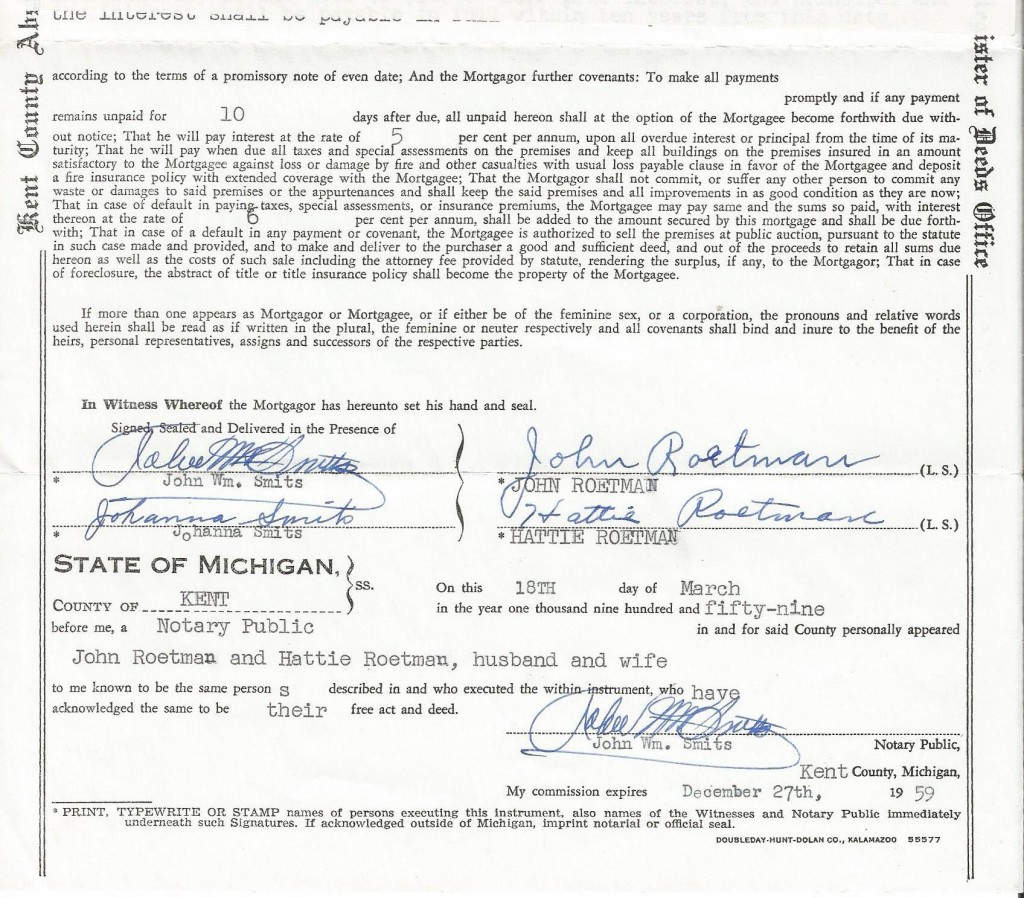 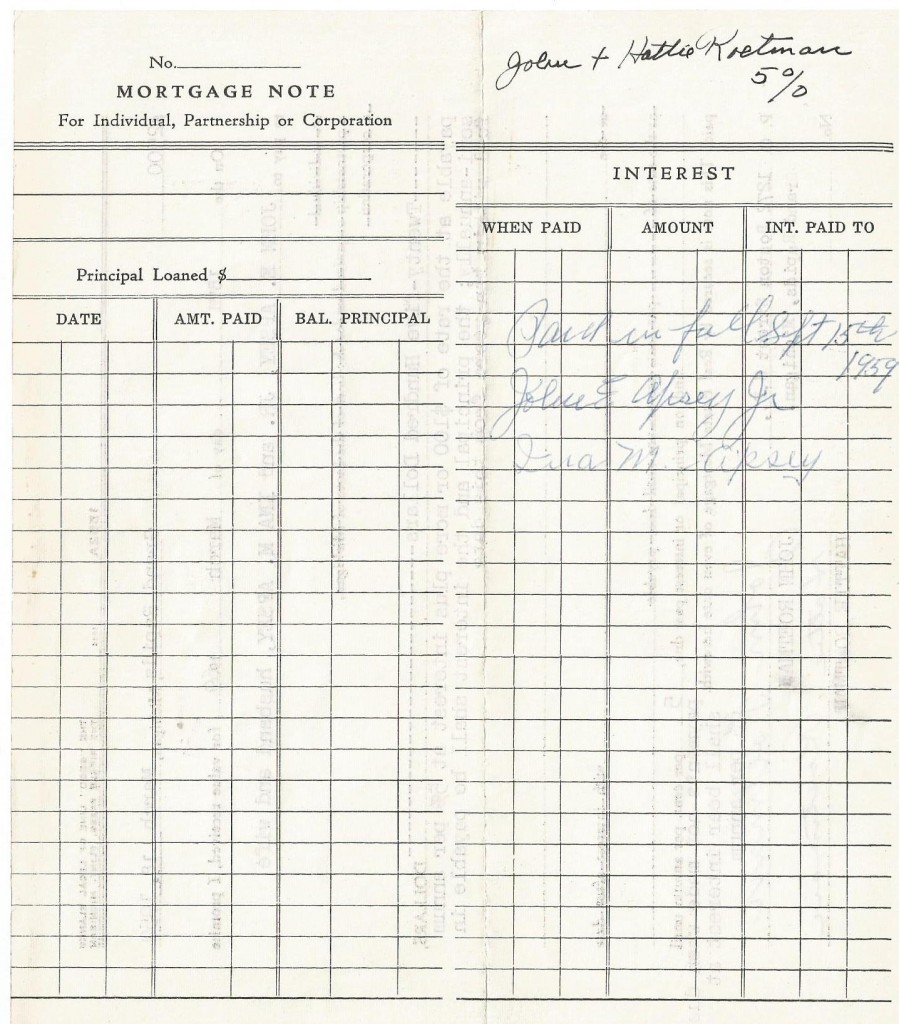 This is a 2nd mortgage/loan collateral on the Boston St. house. 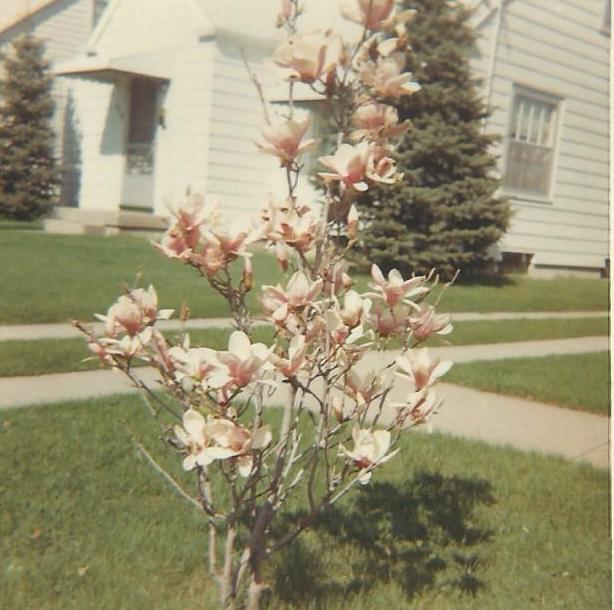 Magnolia tree out front.
Grandpa was so proud of that tree.

Black Cherry tree in bloom out back 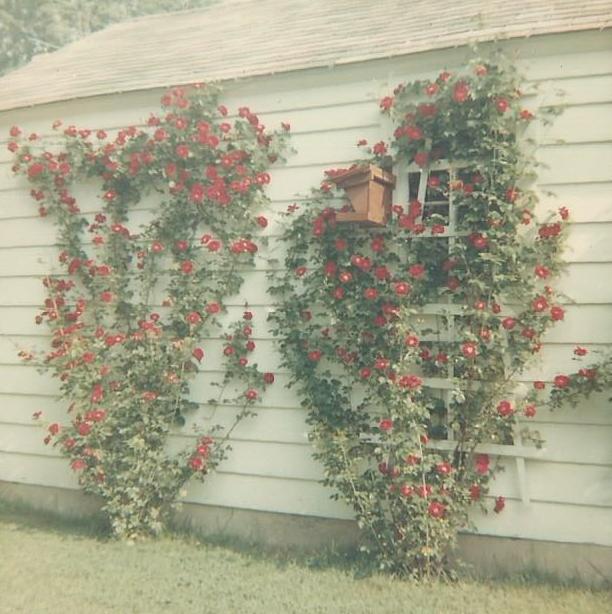 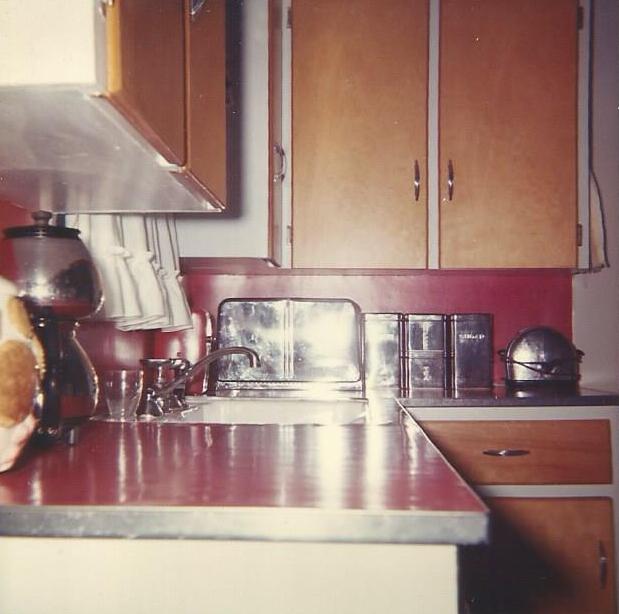 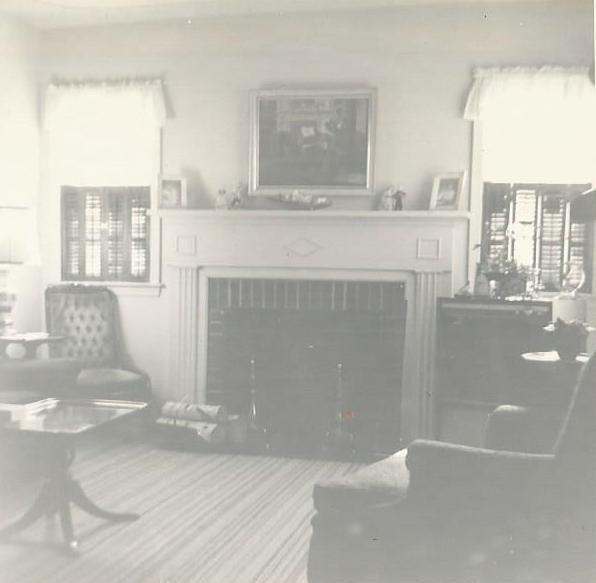 Let’s take a tour of the Roetman Homestead on Belfast.  I remember pulling into the driveway, hopping out of the car, and rushing into the side door.  Nobody used the front door.  It was a long time before I realized it actually could open.  Upon entering the house, you had a choice to either go directly downstairs or turn right, climb a few stairs into the kitchen.  I remember Grandpa having a perpetual tag sale going on in the basement in his later years.  After descending the stairs to the basement, it split.  To the left was a finished ‘rec’ room.  To the right was the ‘utility’ area.  Grandma’s washing machine was there.  I remember her cranking clothes through the wringer and then hanging them out to dry on the line in the backyard.  She would hang sheets out even in the winter.  There was a joke about them being freeze dried.
Through another area, was Grandpa’s work room and a toilet.
Back upstairs, the kitchen was small.  There was a window over the sink which faced the street and another one looking out the side by the drive.  The stove was opposite the sink with the refrigerator right next to it.  Of course, who can forget the cookie jar at the end of the counter?  I can still taste those cookies. Sugar cookies, Windmill, Coconut, Lemon… it was always full, but Grandma would only let you have one.  Grandpa on the other hand…
Off to the right was a ‘dining room’.  It had a matching Maple table and hutch cabinet.  I remember many mornings eating breakfast there after spending the night.  They always had a BIG breakfast with eggs, bacon, toast, juice, and coffee.  Grandma always complained that Grandpa never buttered her toast to the edges and “after all these years, you would think you would get it right”.  I can still hear her call him “John”.  They both over-filled their coffee cups with milk and drank it from the saucers.
From the kitchen, you walked into the living room.  It had a fireplace at the opposite end.  Sofa along the inner wall and Grandma’s chair next to it.  TV was in the corner.
To the left was the bathroom and 2 bedrooms on either side.  The bathroom was PINK and always smelled of roses.  Grandma and Grandpa’s bedroom was to the right.  I remember it being blue.  To the left was the spare bedroom that I always slept in.  It was yellow.  It had the prettiest , floral chair in the corner.  Upstairs was an attic space that had been turned into a bedroom area.  It was the storage area.
In later years, the house on Belfast was the home to many of the cousins.  Lots of good memories and a lot of love in the walls of that house. 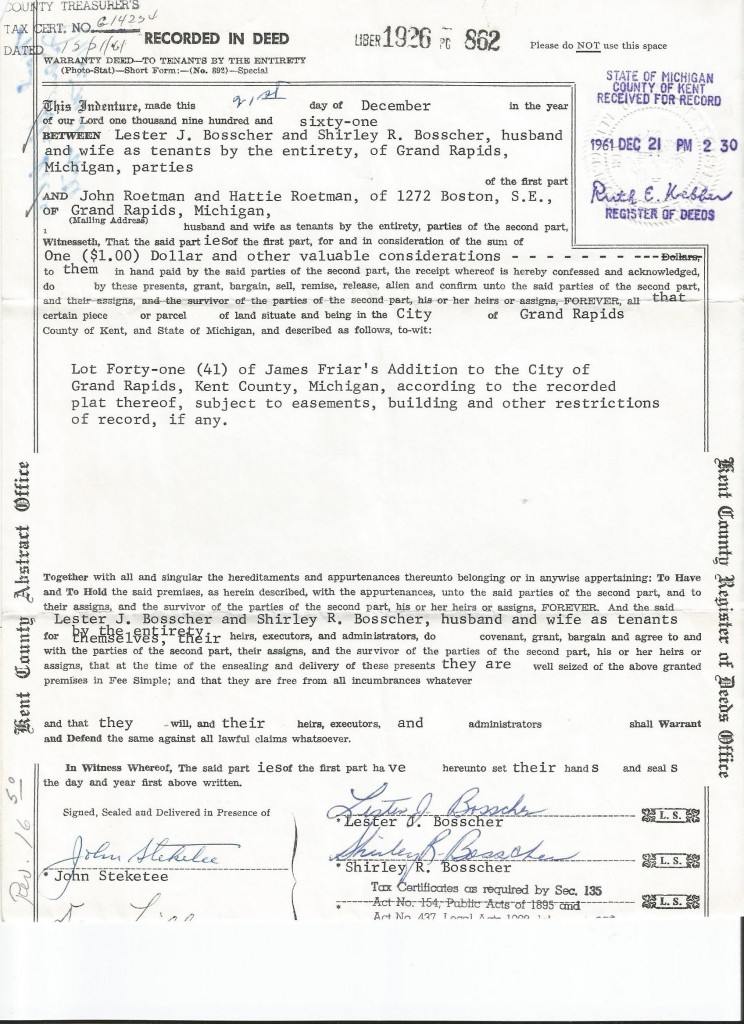 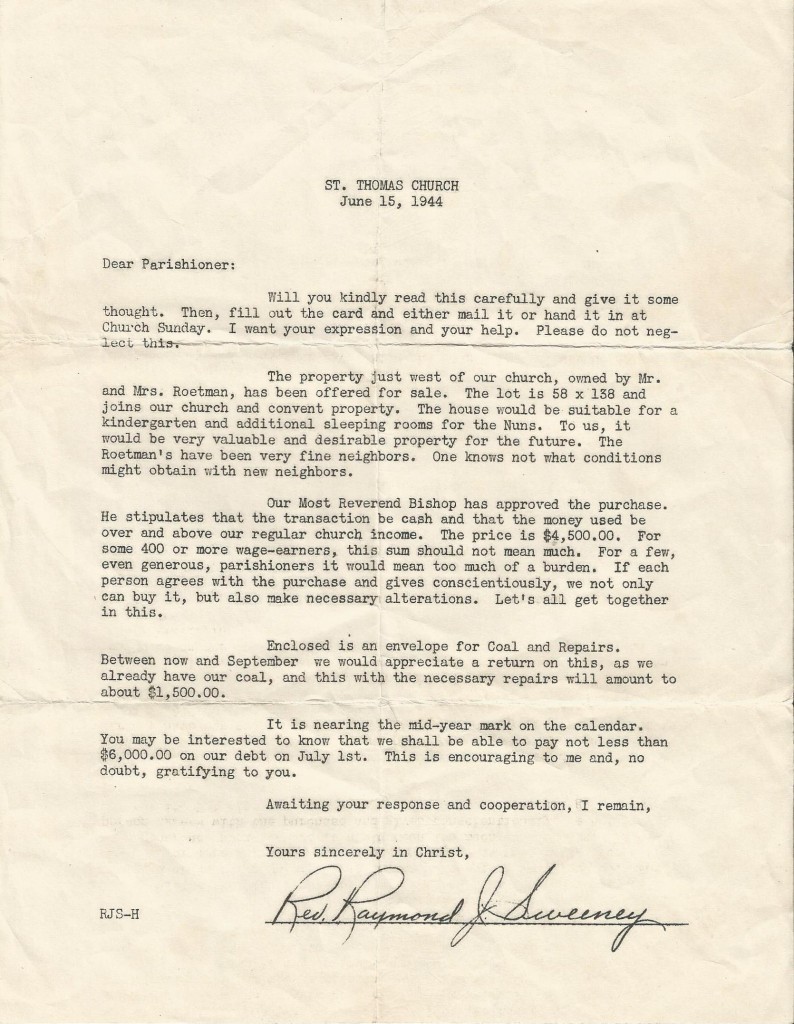 Letter of intent of purchase of
51 Wilcox Park by St. Thomas Church. 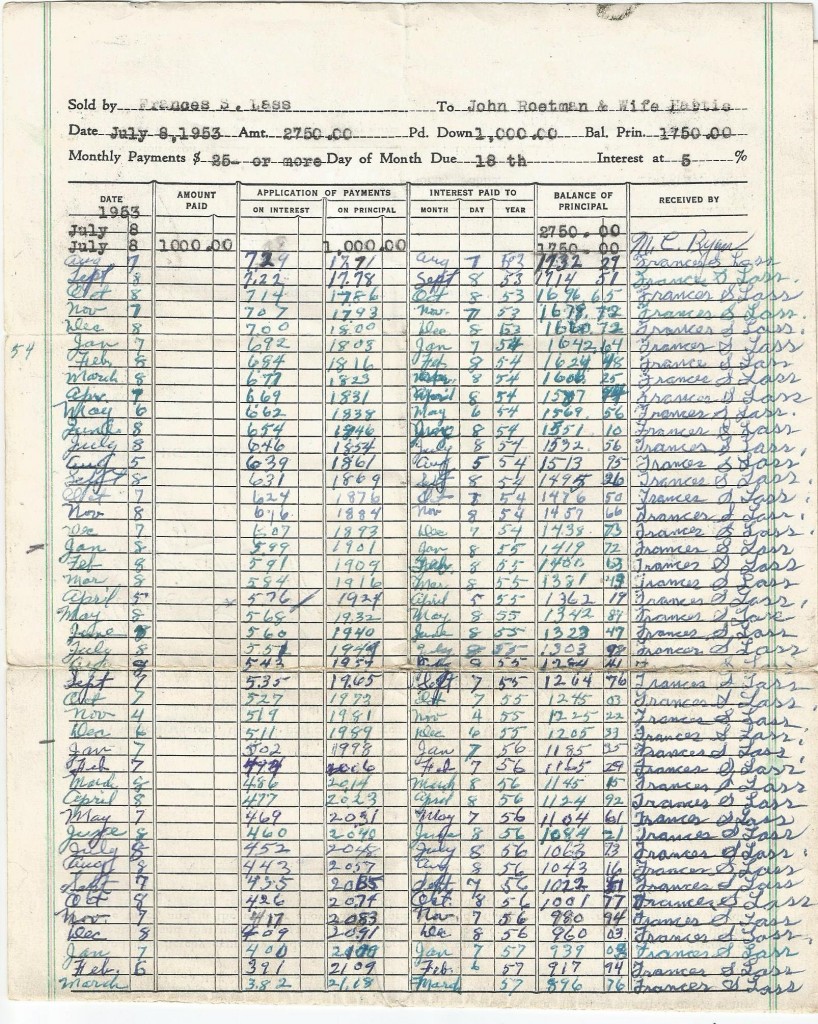 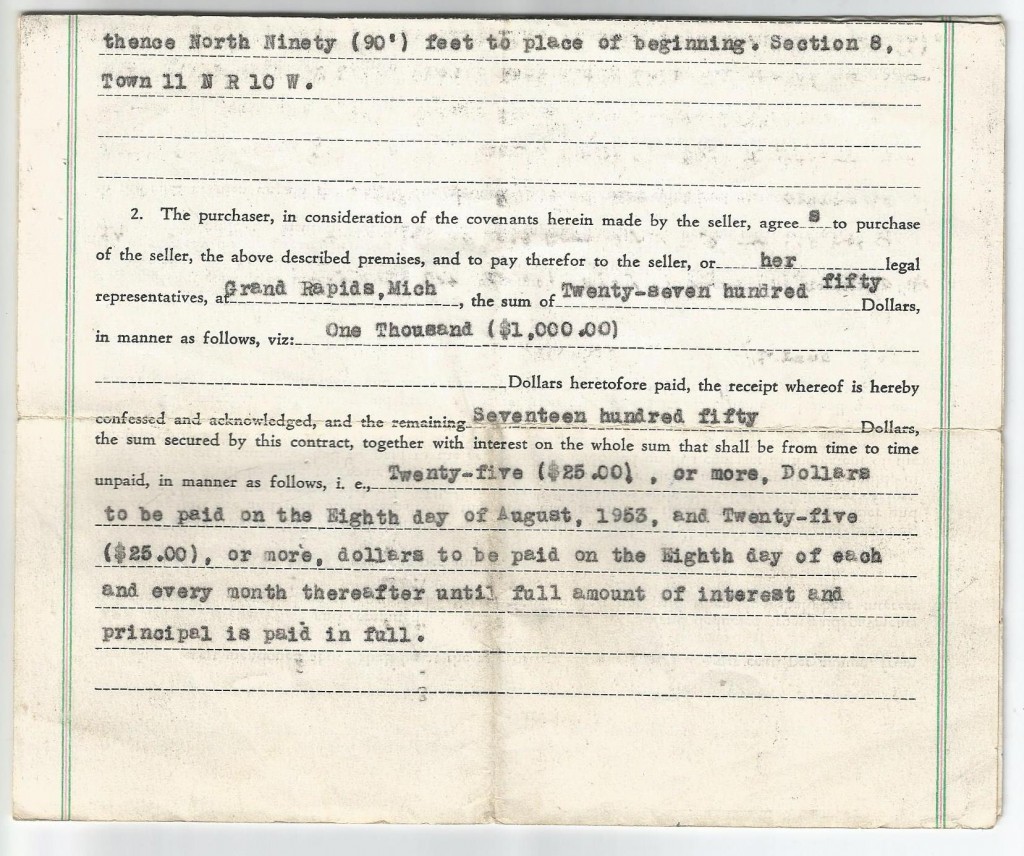 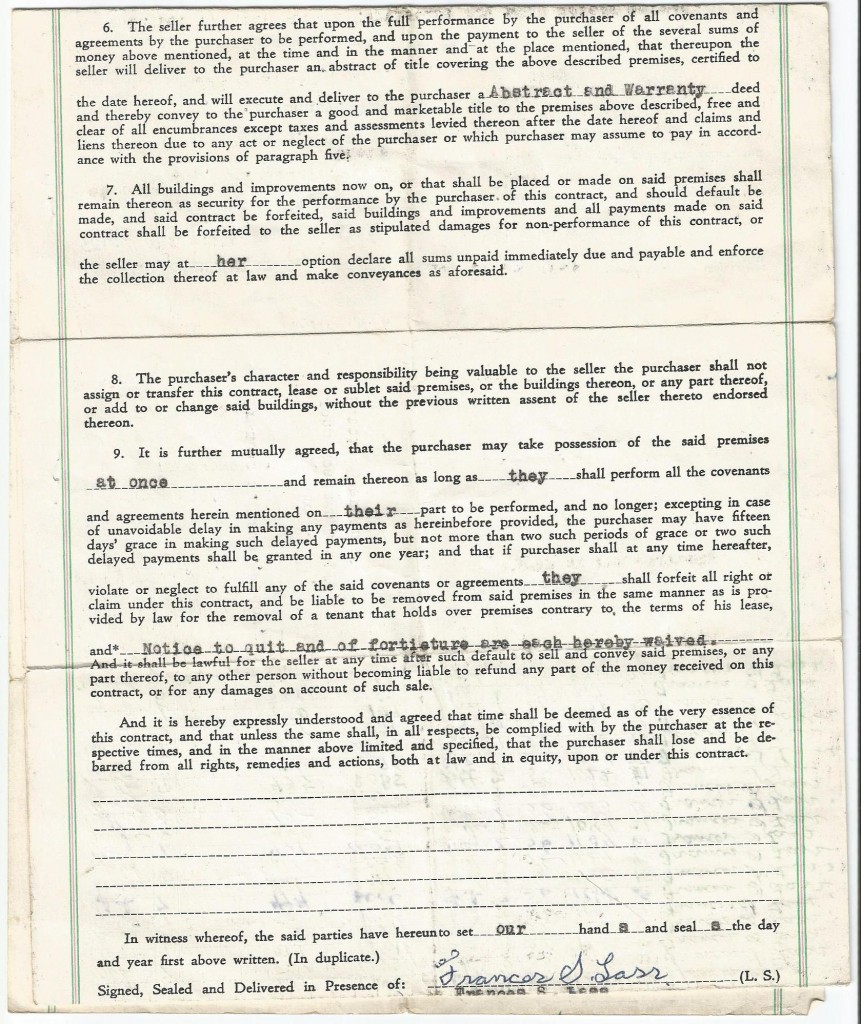 Purchase agreement for the cottage on Little White Fish Lake