Faith and family were the cornerstones for which Lois Bowman lived. Raised from frugal beginnings, Lois knew her share of heartache, but she came to lead a full and rewarding life surrounded by those she held most dear. Ever loving and dedicated, Lois’ heart knew no bounds. Although deeply missed, Lois created numerous memories through the years which will continue to be treasured by those she leaves behind.

By 1929, the days of the flapper and the infamous Roaring Twenties gave way to hard economic times. Just merely the beginning, the Great Depression was officially launched in a country that had seen much growth and prosperity. Despite these troubling times, George Albert and Josephine “Josie” (Kik) Edsenga of Grand Rapids, Michigan placed their unwavering trust and hope in their Lord. This was especially true on December 5, 1929 when blessed with the birth of their little girl, Lois Jean.

One of ten children, Lois joined her older siblings, Lawrence, Elaine, Jack, June, and Bobby. Sadly, Bobby died at the age of three. Lois would later welcome four younger siblings, Jim, Norma, Ken, and Keith, although little Keith passed away shortly after birth. Lois’ father was a jack-of-all-trades. He worked as a lather, did some construction, and also hung wallpaper for a living. Times were difficult during the Depression, but he somehow always found a way to provide a roof over their heads and food on their table. Her mother, a busy homemaker, had ten children in her fold by the time she was 37 years old, raising her family on Crosby Street on the city’s northwest side.

On Christmas Day 1938, Lois and her family experienced the sad death of her mother at the young age of 39. Times were already a struggle, and left to raise his children alone, Lois’ father worked as much as he could. The children often fended for themselves, although Lois and her sister lovingly cared for their younger siblings. Despite these difficult days, Lois’ father took his children ice and roller skating whenever he could which was one of Lois’ fondest memories. And he always made sure his children were in church on Sunday mornings at Calvary Church. Another memorable event during Lois’ youth included the time she and her sister, June visited their Aunt Helen’s cottage in Lapeer, Michigan for a week. It was the one and only vacation Lois ever knew as a child.

Along with June, Lois’ heart-of-gold shone bright even as youngsters when the two taught Sunday school to the neighborhood kids. Even though Lois and her family were very poor, there was always room in their hearts to help others. When times were lean, Lois’ father knew his help came from above. One time while sitting on the front stoop of their home with his little ones in tow, Lois’ father cried out to the Lord, desperate to put food in their hungry mouths. He no sooner opened his eyes and a street peddler, done with his days work, had five loaves of bread he graciously offered to Lois’ humbled and grateful father.

Lois attended Buchanan School and Harrison Park, tending to her studies all while seeing to the needs at home. In her youth she enjoyed ice skating, roller skating, playing jacks, and learned how to sew. Lois was an accomplished seamstress, and was good at knitting and embroidery, too. While roller skating one time, Lois met the young man who came to win her heart, Robert George Bowman. A handsome young man, they dated for the following two and a half years, and Lois went on to graduate from Union High School in 1947. With a deep, abiding love, they were happily married on October 14, 1948 at Wealthy Street Baptist Church.

After enjoying a week long honeymoon at Niagara Falls, the newlyweds began their new life together in Grand Rapids, but a job offer for Robert in Big Rapids found them settling there for a time. Robert worked as a dental technician, while Lois worked as a secretary in the prosecuting attorney’s office. While working at Art Craft Manufacturing, Lois made emblems for Boy Scout uniforms, and numbers and letters for high schools. Lois and Robert made another move to Holland for a brief time before eventually returning to Grand Rapids. They first had a place on Merrifield before moving to a house on Edith. When they lived on Tremont Boulevard, Robert grew the most beautiful roses which Lois loved. They later settled into their Cummings Street house in Walker where they spent the next 30 years of their lives together.

Throughout this time, Robert and Lois had the blessing of raising three fine sons. Robert Jr. came along in 1951, followed by William in 1956, and Daniel completed their family in 1959. Lois made a good and loving home for Robert and their boys. By now Robert had his own dental laboratory, Bowman Laboratories, Inc. where Lois scheduled work, processed payroll, and did accounts payables and receivables until she was 81 years old!

Lois and her family attended Wealthy Street Baptist Church and later, Calvary Church. For the last several years, First Evangelical Covenant Church was their church home. Lois lovingly gave of her time and talents as a volunteer with the Children’s Bible Hour. Through the years, Lois formed cherished memories with her family. They vacationed at Silver Lake in Hart, Michigan for two weeks every summer, and for 13 years rented a cottage there. Memories of their vacation to the Upper Peninsula will always be a treasure, as will trips to the East coast and Florida. After retiring, Lois and Robert spent several weeks in Florida or Gulf Shores each year.

The hymns of her youth were Lois’ most favorite. She never asked for much, and could be quite frugal at times She did have several items that had great meaning for her including an antique bedroom set, her Duncan Fife table and chairs, a sterling silverware and china set, figurines, and of course, her 1998 Mercury Grand Marquis!

Lois was a remarkable cook and loved baking. A few of her specialties included delicious fried chicken, homemade vegetable beef soup, and a variety of desserts like her scrumptious banana bread, cookies, and homemade hot fudge, otherwise known as, “Grandma’s Dirt”. When it came to dining out, Lois loved prime rib and Mexican cuisine. She enjoyed going to Big Boy, Win Schuler’s, Mr. Burger, IHop, Russ’ Restaurant, and the Grand Villa. For many years, Lois so enjoyed her father stopping by for coffee visits, and she was sure to send him home with a good, homemade meal to enjoy. In the last years of her father’s life, Lois lovingly cared for him.

One would be hard pressed to find anyone as devoted, loving, caring, and compassionate as Lois. She gave selflessly from the heart, and her patience had no end. She was a wise woman, as well. When times were tough, one of her many expressions such as, “Oh dear!” or “Keep on keeping on” were the encouraging words she so often spoke. She was a testament to her faith, and lived by example. “If you know when you put your head down on your pillow at night that you have done your very best, that’s all you can do.” Lois was a compassionate and giving person who loved doing things for others. A loving and dedicated wife, mother, grandmother, great-grandmother, sister, and friend to all who knew her, she will be greatly missed and lovingly remembered.

A service to celebrate Lois’s life will be held on Saturday, July 18, 2015, 11:00 AM at Heritage Life Story Funeral Homes, 2120 Lake Michigan Dr. NW. Burial in Rosedale Memorial Park. Relatives and friends may meet with her family on Friday from 2-4 and 6-8 PM at the funeral home. Contributions in her memory may be made to Faith Hospice at Trillium Woods. 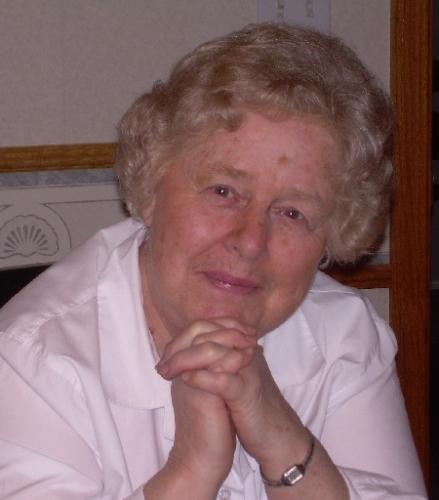