It can be challenging trying to understand vintage recipes according to modern terms . Our ancestors often wrote recipes with just the main ingredients. The rest was assumed. Cooking rarely had a specific formula. It was done by instinct. A little of this. A bit of that. Today I’m in the mood for more of _____. Often that day’s fare was determined by what one had on hand in the kitchen or what was ripening in the garden. Running to the grocery store was not an option. Every kitchen pantry had its ‘staples’, of which many things could be made from to satisfy hungry tummies. It was common to ‘borrow’ a cup of something from a neighbor should you be short. It was ALWAYS replaced, usually along with a thank you treat.

Measurements were often speculative. My mom never had a recipe for her pie crust. It was done by feel, and she made the BEST pies. I never wanted cake for my birthday. I wanted one of her blueberry pies. Our current world is continually downsizing the volume of contents compared to the container size. There are no longer 16 ounce cans of things. They are now 15 or 14 ounce, even though the size of the can has stayed the same. Therefore, if a recipe called for a can of something, you will need to adjust the recipe.

John’s Sausage Recipe calls for ‘boxes’. Not too long ago, we purchased spices in cardboard boxes or metal containers. 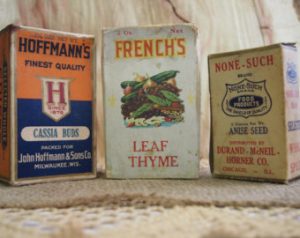 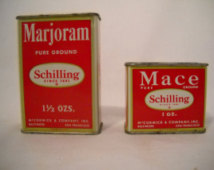 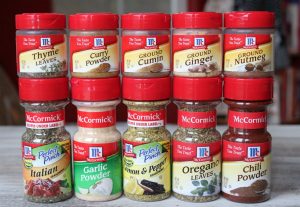 I’m not sure if the content volume has changed. My best recommendation is to adjust accordingly. Salt box containers have not changed much over the years. The current volume of Morton’s salt is 26 ounces. That size goes back many years… 1970’s and before. I have found other brands that sold 2 pound boxes, so again, measurement is speculative.

Common abbreviations used in the recipes:

C = cup
t or tsp. = teaspoon
T or TBSP = Tablespoon
reg. = regular
sl. = sliced
min. = minute
oleo = margarine = butter or shortening
soda = baking soda
B powder = Baking powder
opt. = optional
veg. = vegetable
med. = medium
# = pound
the letter ‘c’ with a line over it is a medical abbreviation for ‘with’. Aunt Hellen Louise was a nurse and used this in her recipes instead of w/. I do too.