I came across an interesting bit of information buried in a news article in the Grand Rapids Press, dated November 17, 1906. It reads… ” John Apsey arrested at Reeds lake, charged with illegal parentage. demanded an examination. Nellie Bart is the complaining witness.”

The first thing I questioned was, what is ‘illegal parentage’? I can’t come up with a specific definition or statute of law, but it apparently involves a child born out of wedlock. I’m not sure why someone would be arrested if its not a specific law, but things were different back in 1906.

There were three John Apsey’s alive and living in the [East] Grand Rapids area in 1906. John the Elder would have been 73 at the time. I can’t be absolutely sure that he isn’t the one being accused, but the probablilty of getting an 18 year old girl pregnant at his age is a little hard to fathom. On the other hand, the old man gave his family plenty to dislike and his wife and two of his children were cut out of the will. That story to be told later.

John Sr. was 43 in 1906. He was extremely active in politics in [East] Grand Rapids and involved in many political disputes. I think if he was the person so named in the complaint, it would have been incredible fodder for his political enemies to use against him and would have made senstional headlines in the papers. But then again, what better reason to cover it up?

John Jr. had just turned 20 when this article appeared in the paper. I think it is more likely that he would be the one to get an 18 year old pregnant, considering the closeness in ages. If indeed the accusation is true.

Any records of Julia always refer to her father as Charles W. Miller. She uses the last name of Miller until she marries. I cannot find an actual birth record for her. Nellie and Charles married 7 years after Julia was born. It is possible that Charles is the father and they didn’t marry until much later, but why didn’t she name him as the father in 1906? I think it is more likely that Charles adopted Julia.

So what is the real story? Did one of the John Apseys father Nellie Bart’s daughter? Did he own up to it? Pay her off? Send her away? I find no evidence of Nellie’s existence in the Grand Rapids area from 1910 until 1913 when she marries. Charles Miller was from Chicago. Jennie Bush Apsey’s family was originally from Chicago. Did the Apseys send her and the child away to relatives there where she met Charles?

Of course this is all speculation based on a blurb in a news article. I write about it just in case someone from Julia’s family does DNA testing and comes up with a ‘who the heck is this?’ result. If the genetic proof is there… Welcome to the Family. 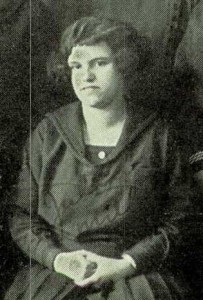