This is a follow up of a blog I wrote March 19, 2016 titled, “Illegal Parentage“.  It concerned John Apsey who was arrested on the charge of fathering a child out of wedlock. More information has presented itself, which I might have found at the time if a certain Genealogy website actually had available what they advertise.

I found articles in several Grand Rapids Herald newspapers about the incident. We now know the person charged definitely was John E. Apsey, Jr., the son of John Elisha #2. The first John Elisha just went by the moniker, John, hence the confusion in lineages.

John E. Jr. was not only arrested, but also brought before judge and jury to determine the parentage of the child. It was determined that John Jr. was in fact, the father of the child and ordered to pay for support. The articles do not tell of what exact evidence was given to persuade the jury of this determination. DNA testing was not available at that time.

It is interesting to note, that in the one article describing court events, the baby is referred to as ‘he’. This was either a mistake on the part of the reporter who had difficulty judging the gender of a bald-headed baby or was simply a neutral pronoun reference. The babe born to Nellie Bart in 1906 was a girl. 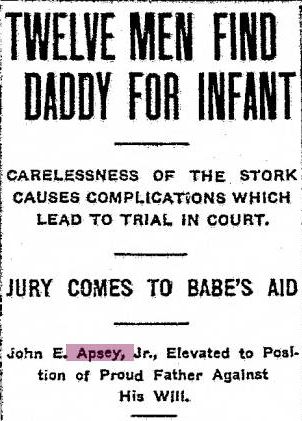